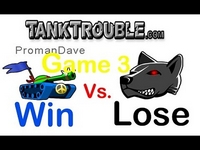 Tank Trouble 4 is a tank game to shoot the enemies with your mouse. The gameplay is so simple. You, as a tank driver, have to search the opponent military bases and destroy them with missile bombs.

In the Tank Trouble 4 game, you have limited tank rockets, so while using them, your target should be adjusted very wisely. You need direction arrow keyboards to navigate the tank. Alternatively, W, A, S, D buttons also work to move forward, left, backward, and right, respectively. Mouse and left click help you fire the missiles. Graphics of Tank Trouble 4 is really cool, and it is easy to download the SWF file. Your first purpose consists of analyzing the environment. Collect the red boxes and rockets to load health and missiles. Hide the tanks behind the barriers and try to shot from a distance to protect the enemy’s fires.

Don’t get scared if your tank starts burning since it is just a part of Tank Trouble 4. However, unlike the other tank battle games that the game is based on, Tank Trouble 4 features a bouncing bullet. Bullets bounce off walls providing more excitement on the battlefield.

A single player can play the game against an AI named LAIKA that is shown as a black robotic panther. The game also features a hot-seat two-player mode and a three-player mode. Random power-ups may also spawn inside the map. Some power-ups change your weapon entirely, and mastering them all is the key to victory.

The tank battles stopped for a while, but today in Tank Trouble 4, the temporary truce is again broken, and you have to enter the battlefield to destroy the enemy. You can play as a group with a maximum of four armoured vehicles, as well as together, together and alone against a computer bot. Choose a difficulty mode and go to the labyrinth. The walls will become your cover, but they can also become the source of the destruction of your tank.