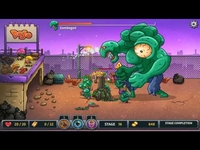 Zombo Buster Rising is a unique shooting defense game of the action game genre. The story in the game is about a city named Medan City that suddenly gets infected with a deadly virus by a mysterious man. This dangerous virus has turned people into zombies. You will play the role of a survivor of the zombie attack, you will alone try to fight against the zombies to protect the modern arsenal. Zombo Buster and his crew perform a mission to fight against the zombies in an effort to save humanity from the overall formation. Do not worry because the squad of zombies after wiping out an area of ​​the city has received a distress signal from you, they need time to move into the city center. Just hold on to their arrival, you will survive. Shoot them all! Buy items, upgrade your skills and entice your team into this explosive sequel to live another day.

- Mode, according to the storyline, has more than 30 challenges for you, the way of survival will be endless, without stopping.

- Many types of zombies are designed quite funny, they have different names and different abilities.

- 3 characters with different special skills, upgrade those skills in each level.

- Many missions with increasing prizes.