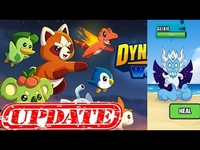 Dynamons World is the third installment in the Kiki Games’ famous Dynamons great pokemon game series. Here, you will continue to join the adventure journey to explore the fascinating world of Dynamon and show your monster training talent to fight with millions of other monster educators.

Join the adventure and explore the fantastic Dynamon world with millions of other players in the action strategy game Dynamons World. Hunt, train monsters and put your creatures in pokemon wars to see who is the best animal trainer.

Your main task in Dynamons World is to capture and train a powerful team of battle pokemon, then challenge your friends in real-time PvP matches. Explore an open world in search of the rarest and powerful animals, fight powerful opponents to prove your skills and become the best animal trainer of Dynamon.

Hunt and train an army of the most potent Dynamons and challenge your friends in real-time PvP battles. Also, players can explore an open world in search of the rarest and strongest pokemon, fight tough opponents and prove your skills to become the best trainer.

Features of the Dynamons World game

Online Arena Battles: Fight with friends and other players around the world in crowded PvP battles.

Unleash excellent skills and tactics to defeat the most vigorous opponents.

Travel from Dynamons Camp to Temple Ruins in an addictive and mesmerizing story.

New online battle arena: Challenge your friends in 1-on-1 battles.