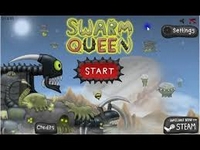 Swarm Queen is an epic, challenging strategy game about hideous insect creatures trying to kill each other for supremacy by creating alien creatures.

Your mission in the game Swarm Queen is to create an army of self-control minions and watch them tear the enemies, covering the battlefield in blue blood. You must use geothermal vents to incubate and grow your army to defeat enemies! Create a reaper to collect resources and then use those resources to mutate eggs and create mighty armies. Build units and upgrade technology without having to control your army. Instead, each minion has its own AI, manipulating its behavior on the fake 3D battlefield. So mutate your eggs, spawn your herd, grab some goats and watch the chaos of battle.

In each battle, you must try to defeat the queen of herds and try to conquer this planet. With 21 different units, great gameplay and interesting strategy mechanics, this game is fun! Work your way through each level and try to raise a mighty flock today.

Features of the game Swarm Queen

Different units will be used