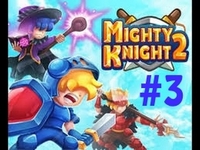 Since ancient times, evil forces have invaded important areas and territories of peaceful people and towns and hate violence. However, the people could not do anything because their fighting ability was not available, indignantly watching the raging enemies. At such times a qualified force would stand up to help the people, that were knights with strength and courage. They are ready to take part in the battle to be able to help honest people from disaster. This is also a very interesting topic that many online mini game developers have used for their products.

Coming to the game Mighty Knight 3, you will be involved in battles against the dark forces, by controlling a knight with high-powered martial arts, destroy all enemies and head towards the shadow castle. Evening to defeat the demon king to free the king of the captive kingdom. Skillfully controlled to be able to help the knight move as well as perform attacks with his sword. And every time you go to a certain land on the journey, you have to fight.

The enemy will become more and more powerful, if you keep the strength and ability of the knight, you will not be able to fight the enemy. Therefore, it is important to upgrade your strength with the gold collected after each battle. The upgrade system of Mighty Knight 3 is also very rich, which will bring you excitement. Show off your fighting skills and chivalry in this hot action-adventure game.