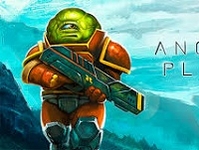 Ancient Planet is a fighting game that uses a solid defense tower. The context is that in ancient times, alien invaders came to invade Earth and the army was established through the tower fight.

You will place battle towers on the invader’s path to destroy them. Placing towers with different fighting abilities, there are many types of towers, each will have different fighting properties and can be upgraded many times. The towers can be placed at different allowable locations if you do not want to use that tower, you can replace it with another tower, or move to another location.

The invaders come in turns, they move very quickly, and each turn can be of similar shapes and abilities. When they survive and move to the end of the road, they will destroy your base and the more troops you drop, the sooner you will fail.
You get bonuses for destroying these army classes, use it to buy upgrades for your tower.

The game has 15 levels with voices of real characters will give players extremely interesting experiences, helping players relax after a tiring day.