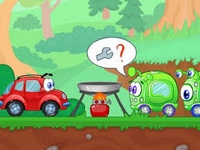 Wheely 8 – Encountering foxes and other wildlife on an interesting picnic can be common, but in Wheely 8, the eighth instalment of the popular puzzle series, there’s no room for things. Is that a shooting star? In the morning? Is not! It was a UFO!

Wheely went on a date with his girlfriend, Jolie. They decided to go on a picnic. They had a great time until suddenly a UFO fell behind them. There are aliens inside who have been lost and need help finding their planet.

Wheely and his girlfriend, Jolie went on a picnic. They had a fun time, until something unexpected happened! A UFO falls down one of the aliens inside who needs a part to be able to fly back to space. In 8, you have to help him get back to his beloved Jolie!

The red car is ready for more rolling adventures. In this sequel, you have to interact with many different obstacles to clear the way. Start and stop Wheely in the right place to prevent accidents!

These aliens are very friendly and they need help to fix their spaceship. Wheely offered to help them, and he trusted you to handle the situation. Turn this picnic into an unforgettable memory by helping aliens and show them the friendly Earth to stop a future invasion!

You can play games on smartphones and tablets (iPhone, iPad, Samsung, Android devices and Windows Phone)